Spybaiting is a new technique that has gained traction in the bass fishing world in recent years. This unique fishing lure originated in Japan’s Lake Biwa region to catch bass in the lake’s crystal water.

Whether you’re a professional or recreational angler, you could benefit from adding spybaits to your bass fishing repertoire.

Selecting the right spybait can make the difference between a successful fishing expedition and a mediocre trip. This section will explain what you should look for when choosing spybaits for bass.

A spybait is simply a lipless, rigid bait with two propellers attached to each end. Although it looks similar to the common bait, the spybait has three characteristics that set it apart from traditional lures. These characteristics include the plume, the list, and the shimmy. 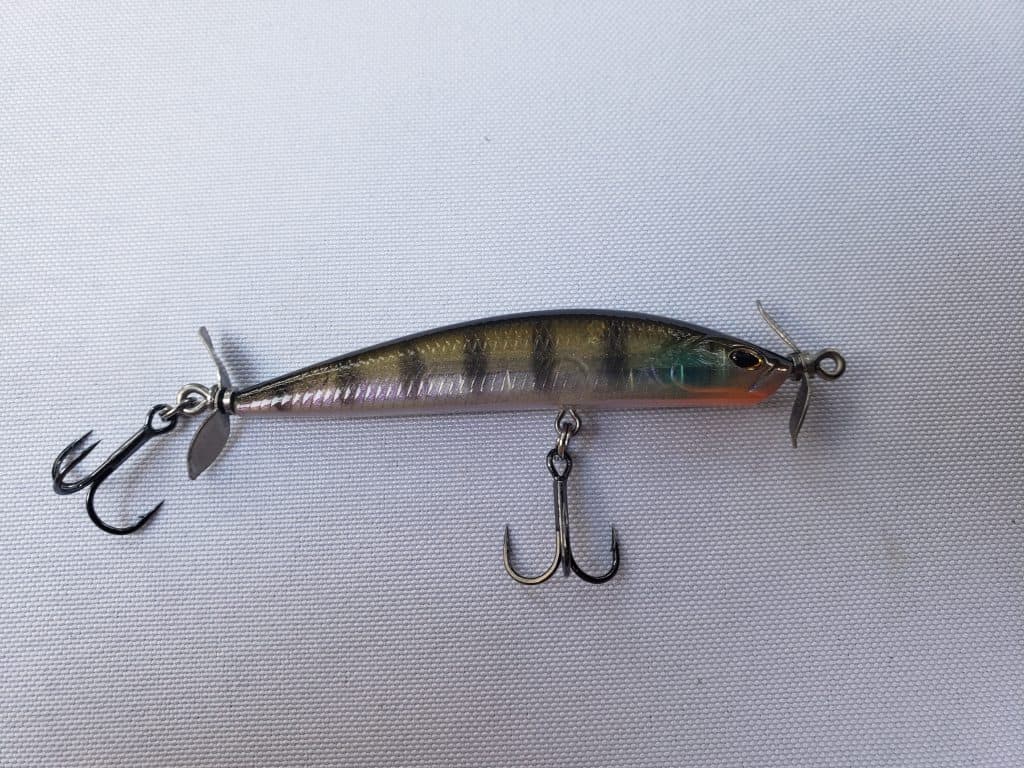 You can cast a spybait and let it sink for a specified amount of time-based on the spybait’s weight. It attracts the fish’s attention in the area as it falls, making it irresistible to bass.

To use the spybait effectively, you’ll need to drop it to the depth of the bass. Being familiar with the bass’s holding depth will let you know how long it will take the spybait to get there.

When the spybait’s front and back blades spin simultaneously during retrieval, it causes the plume effect. The plum is simply the commotion in the bait path attracting the fish’s attention.

Spybaits rotate along their nose to tail axis as they fall horizontally. This is called listing and it’s similar to a ship’s listing. High-quality spybaits subtly from side to side, creating a flash each time it rotates back and forth. When the bait reaches the depth where the fish are holding, they’ll see its slim profile.

The third key feature of the spybait is its shimmy action. During the listing action, the spybaits will wiggle back and forth, which provides an additional micro flash as light reflects of the lure.

Bass can’t help themselves! That’s why these baits tend to outfish other techniques during the correct time of the year, especially when it’s tough to get bites.

When to Fish a Spybait

Spybaiting is a technique that is effective throughout the year. Like all techniques, its effectiveness depends on the current conditions.

The winter and summer months are the best time to use spybait because, during these months, fish tend to suspend over structures such as ledges, humps, and on the ends of different points.

This technique also works well when there is a school of fish in open water that you can target from a distance by casting the spybait slowly into the school. Clear water is also vital to successful spybaiting since it’s a highly visual technique designed to lure bass for long distances.

Why Use a Spybait Over Other Lure Types?

Some fish are more finicky than others, and bass falls into the finicky category. When dealing with finicky fish, a degree of finesse is needed that isn’t necessary when casting for other types of fish. The spybait is an excellent choice for bass because they are among the pickiest fish in the world.

It works best in clear water conditions, attracting bass to its shimmying. If you’re having trouble attracting bass using other types of lures, you’re likely to find success using the spybait technique.

Pairing Spybaits with Other Gear

To maximize the effectiveness of spybaiting, it’s essential to pair it with the right gear. This section explores the types of equipment that work best with spybaiting.

Using a baitcaster would require purchasing an expensive reel when a spinning rod can do the same thing at a fraction of the price. You would also need to use a lightweight baitcaster, which is hard to find. A light line on a baitcaster increases the chances of spool digging vs. spinning rods.

A good rod set up for spybaiting would be a 6 ft 6 in to 7ft 0 in medium-light rod or drop-shot rod with a 2500-size spinning wheel. A lightweight braid pair with a leader fluorocarbon or a 6-pound fluorocarbon line paired with the spinning wheel works well.

You want a rod with medium-light power and fast action. This will allow you to increase the amount of the rod’s power transmitted into the cast, allowing you to make casts beyond the target area and giving you a more accurate trajectory.

Just as a spinning rod is preferable for spybaiting, a spinning reel is too. Most people use spinning reels with lighter baits, including live baits or plastics. The spinning reel’s spool allows improved flow with minimal drag restriction, allowing smaller and lighter reels to fly further.

Most spybaits are lightweight and small, making spinning reels standard for fishing and casting spybaits. Using spinning reels is helpful with long-distancing casting and allows the spybait lures to move freely. Heavier reels hinder the spybait’s movements and rate of fall.

For spybait, a reel with moderate retrieval with around a 6.3:1 ratio will perform sufficiently. It will give the spybait enough power to move through the water with enough speed to burn in baits when needed.

Pairing a lighter weight fluorocarbon or lightweight braid pair line with a medium-light rod and 2500-size spinning reel is a good setup for spybaiting, as we mentioned above. If you’re using larger spybaits, you may consider using baitcasting gear while following the same fishing rules using spybaits.

When anglers use bigger spybait, they generally use equipment similar to jerkbait fishing using limber rods and eight to ten-pound fluorocarbon lines. You’ll want to use a six pound-test or higher.

Whether you’re a spybaiting veteran or new to spybaiting, knowing which spybaits to purchase can be overwhelming—no need to worry. We’ve got you covered.

In this section, we review the best spybaits on the market.

This is the spybait I wish I had been using when bass fishing in less than ideal conditions. Berkely’s SPY spybait comes in various colors, making them stand out even in harsh conditions. Their exaggerated side flash and fast action almost ensure they’ll get the attention of any bass in the strike zone.

Bass Pro Tour angler Josh Bertrand designed the Berkley SPY to deliver the finesse necessary to lure bass even in the most difficult clear water conditions. The Berkley Spy has a compact profile that resembles various baitfish species and features bullet-like casts. The Berkley Spy may be what you need to up your spybaiting game.

Based on a hand carving by celebrated lure designer Yuki Ito, the Megabass Okashira Screwhead Swimbait comes equipped with an asymmetrical prop featuring one blade that is longer than the other. This design allows the Megabass to generate a unique pulsing presence that attracts fish at a long distance and triggers an aggressive feeding response.

This spybait features a hydrodynamic head design with lanes that channel water under its chin, increasing stability and speeds to ensure the bait is always running true. Its super slide hook offers excellent hook penetration with only sight pressure, including with light tackle. I appreciate these features in clear water conditions with high wind.

The Jackall I-Prop is a realistic-looking spybait that offers some of the most natural baitfish action available. This spybait mimics the movements of a baitfish swimming along, running in a perfectly horizontal position thanks to how its props are set. The Jackall gives off the right amount of flash and vibration necessary to attract bass.

Designed to fish multiple water levels, the Jackall targets bass just below the surface in the middle range. Its two props give off vibrations that mimic the motions of baitfish swimming unthreatened. The Jackall features props designated to keep the spybait in the hit zone longer.

The rear hook eye’s unique design almost eliminates hook tangling so that you can cast out and fish without complications. As someone who’s experienced the angst of tangles with hooks, this is a welcome feature. Its new inner-scale design emits a distinct flash, attracting bass from a distance. This spybait delivers excellent performance in harsh conditions.

The Duo Realis Spinbait was one of the first spybaits to go mainstream in the US fishing tackle market. In my experience, the Duo Realis performs wonderfully for catching various bass, including smallmouths and largemouths in clear water.

The bait’s profile is small with tiny hooks, appearing very natural and gathering power from bass chasing it. With finesse fishing, it’s imperative to have a natural-looking and small lure because the bass spends a lot of time staring at the bait. The Duo Realis accomplishes this, looking like a small baitfish.

As the bait falls, it shimmies attractively, and the spinners turn and hum, with the bait rocking subtly on a slow retrieve. The shimmying motion attracts all types of bass, including pressured bass. The bait sinks well while remaining in action.

Keeping the line diameter down will allow you to keep the bait at depth through the entire retrieve, essential with the spy bait technique. The bait’s detail enhances its effectiveness in clear water, where the fish study the bait for a long time. The Duo Realis has a track record of excellent performance, making it a worthy option.

The Storm Arashi is an excellent choice for targeting shallow or suspended fish. Its third blade is bigger than most, resulting in it running a little more shallow than other spybait. The Storm Arashi moves more than some other spybaits, which can be a good or bad thing depending on the mood of the bass you’re fishing.

I had some success catching fish in water between 7 and 14 feet using the Storm Arashi. Similar to other spybaits, the Storm Arashi works best if you roll with a very light tackle. Using this technique will allow you to cast the tackle well and help keep fish pinned.

The Storm Arashi’s hooks are durable, although you’ll most likely need to change them after a large number of fish or a tournament. When the conditions are right, you’ll find that the Storm Arashi can outfish all the other baits in your tackle box. If you’re looking for an affordable, high-performing spybait, the Arashi storm is worth considering.