It’s tough to imagine getting serious about bass fishing – pulling out big old buckets – without knowing how to use the Carolina rig.

Some call it a minor variation on the Texas rig, others call it a major improvement on that set up, but most agree that there isn’t anything out there on the water that can catch big bass better when nothing else is working.

Below we break down all the ins and outs of the Carolina rig so that you can hit the water later today if you want and catch more monsters than ever before.

Best Conditions for the Carolina Rig

There’s a lot to love when it comes to the Carolina rig, that’s for sure.

But truth be told, the best thing about this setup is that it lets you go after bass whether they are feeding opportunistically (just eating when they are hungry) or when they are feeling a little more frisky and acting a bit aggressive. 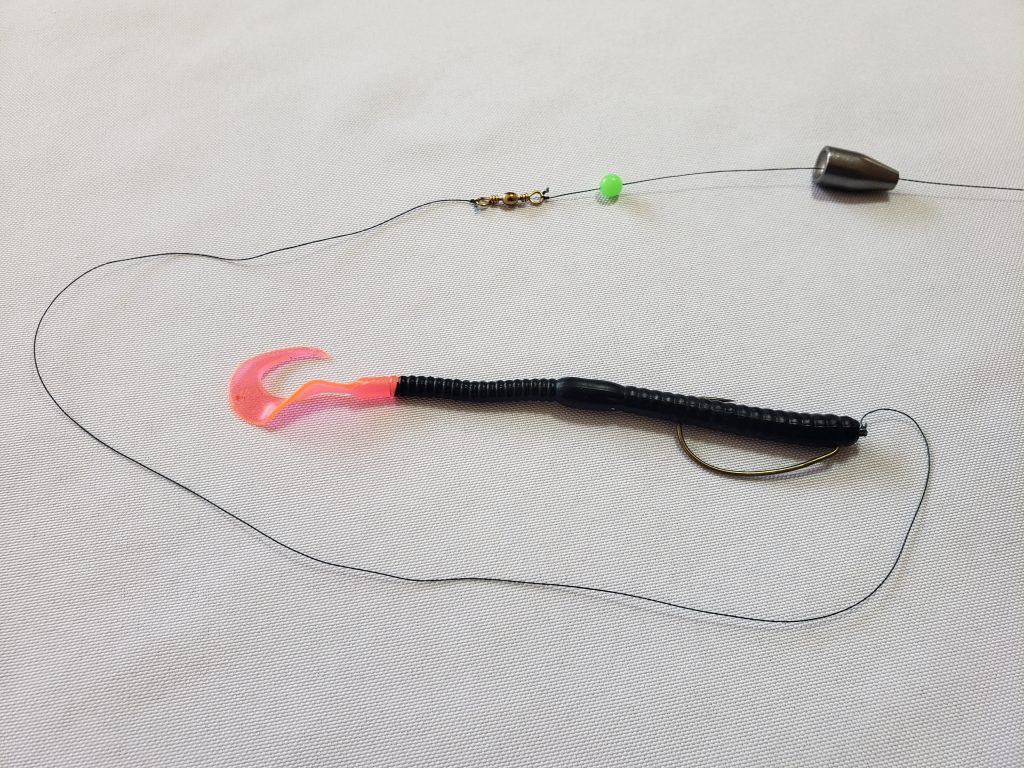 Opportunistic bass are lazy bass, lounging around the lower levels of a water structure just waiting to see what kind of food they can come across. They Carolina rig (weighted properly) lets you drop your fishing lure right down in front of their face, snapping and popping them left and right as soon as they jump on the hook.

The Carolina rig works pretty well for aggressive fish, too. You can use a couple of different lures you might not have been able to otherwise with this set up, flashing some motion and stirring up the pot to get the big, aggressive bass to come and strike your mind.

That being said, there are definitely some conditions that are better suited to the Carolina rig than others.

For starters, this set up works wonders in the spring and late fall/early winter but isn’t so great in the heat of summer.

Cold weather is going to push bass deeper into water structures. The Carolina rig is weighted just so to get down to those depths, sink to the bottom quick, and boost your ability to hook fish where they are rather than putz around on the surface where they aren’t.

Cloudy, overcast days work well with the Carolina rig as well. For whatever reason, bass start to cruise around a little bit extra on days like this as opposed to clear skies and pure sunshine. You’ll want a lure system set up to cover a little bit of extra ground when fish are on the move.

That suits the Carolina rig perfectly.

How to Tie a Carolina Rig

Learning to tie a Carolina rig will only take a couple of minutes.

Best of all, it’s something simple enough that even kids learning to fish can master in an afternoon. It’s the kind of rig they’ll be able to use the rest of their lives, too – which is pretty neat.

To get things going you’ll need to make sure you have all the parts of the Carolina rig ready to roll before you get to tying. 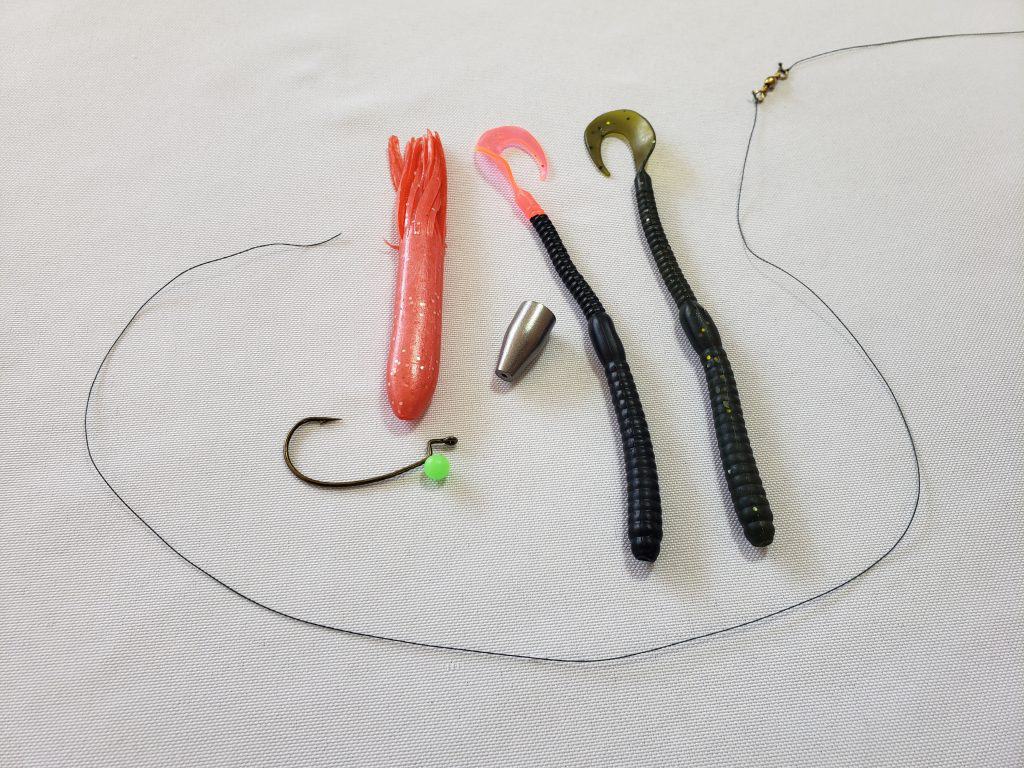 To make things even easier, you can start things off by tying a stretch of leader (maybe two foot long) to your barrel swivel and an offset hook. Make sure the hook is plenty big enough to accommodate the chunk of rubber you’re going to be running with the Carolina rig, though.

Get things going by slipping the line from your fishing pole through the bullet sinker.

The most popular bass lures you’re going to find on the market, everybody has their favorite rubber worm.

Super lifelike in appearance, they also feel like the “real deal” for bass when they hit the Lure. And that means you’re able to hook them more consistently before they spit the hook, too.

At the end of the day, though, there are so many different kinds of rubber worms that finding the right one for you Carolina rig can be a little tough.

Some anglers swear by ribbon tail worms because they have a little tail kick when hooked up with this set up. Others love Senko style worms that work well in pretty much any depth of water. Stick worms, finesse worms, and “creature bait” can all work with a Carolina rig, too.

After settling on a style of worm you want to run you need to start thinking about the size of the bait you’re going to toss. Plenty of folks think the only way to catch monsters is with monster bait, but that isn’t always the way things shake out.

The fact, nowadays some of the best bass fisherman on the planet run much smaller worms than they did in the past. The smaller the worm, the more bites you’re going to get – though that doesn’t mean you have to run maggot sized rubbers when hunting for big bass, either.

As a general rule, is not a bad idea to start with a slightly larger worm than you’d expect would work and then work your way down in size until you start getting the kind of strikes you’re after. 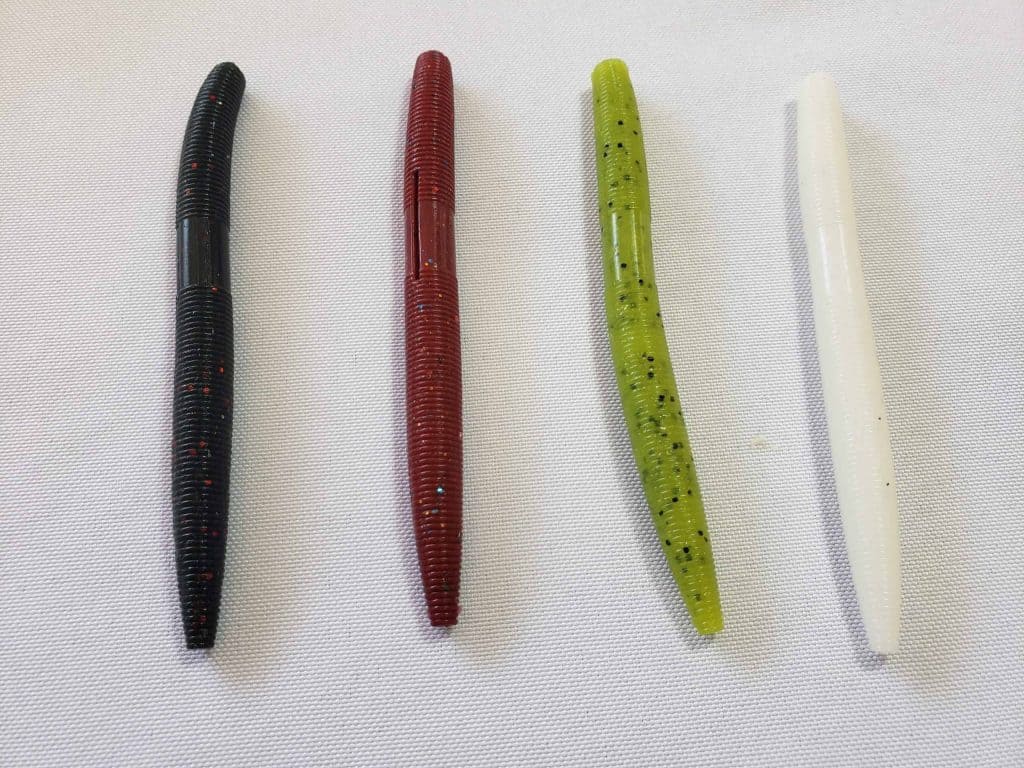 Of course, the clarity of the water you’re working in should also factor into the size of the bait you are running with the Carolina rig. Clear water can handle smaller worms because of the visibility whereas muddy, murky water (or dark, deep water) should have something a little more substantial on your hook.

On a Carolina rig (when you’re fishing down deep) you’ll want a worm that’s a little brighter in color. It should still be somewhat natural for sure, but green pumpkins, orange glow worms, and worms with plenty of red flex throughout work wonders in deeper, darker water.

While you could technically run pretty much any kind of hook you want at the end of your leader for the Carolina rig, some are definitely better choices than others.

The absolute best option available is an offset shank, wide gap hook with plenty of room and space to let your plastic wiggle freely. Other folks really like to run EWG (Extra Wide Gap) hooks that are pretty specific to the plastic and the rubber that they are going to be tossing out as bait – but again you want something with a bit of extra room in a bit of extra space than what you usually run.

The important thing here is to find a hope with plenty of shank that can pass right through the bulk of the plastic with a little bit of offset. You’re going to have to set the hook through the weight of your sinker system (and then through the length of your leader) so you want something that you can really in quick and tighten up before you go for the set.

As always, the size of your hook should always be dictated by the bait you are running.

Anybody tossing out skinny ribbon tail worms will want something a bit smaller than anglers chucking full-size rubber crawfish and or rubber mice.

There are all kinds of weights you can get your hands on when running a Carolina rig, but nothing beats tungsten no matter what size or style you are shooting for.

Smaller, denser, and harder than lead you’ll have to pony up a little extra cash to get your hands on tungsten weights but there isn’t an angler that use them that feel like they aren’t worth the premium price.

Bullet and barrel style tungsten weights both work wonders with the Carolina rig. These shapes won’t get stuck in small cracks, will help you pick up on subtle bites, and have the kind of durability you don’t get out of more traditional options.

When it comes to getting your hands on swivels you really have two different options to pick and choose from:

Most folks are going to shoot for a barrel style swivel as the “fulcrum” of their Carolina rig. We mentioned earlier you should tie your leader and your hook to your swivel ahead of time just to shortcut the process a little bit. That’s solid advice!

A Carolina Keeper is a whole different beast altogether. You can pick one up at any tackle or bait shop imaginable (as well as online) and they really do make life quite a bit easier.

On the flipside, if you don’t know how to tie a barrel swivel with your Carolina rig and you lose a Keeper while out and about you can really find yourself handicapped for the rest of the day.

Lots of different leader options exist, with some folks preferring monofilament, others that like to run braided line, and some other people using fluorocarbon line.

Fluorocarbon is definitely the most modern option around and a lot of anglers like everything it brings to the table compared to the more old-school approach of monofilament or braided line. It all comes down to your comfort level and your budget, of course.

The important thing to focus on here is not so much the leader material you are running as it is the length of the leader your allowing.

As a general rule of thumb, you’ll want to keep your leader under 2 feet to 3 feet long maximum – though in some circumstances you can stretch that out a little bit and still have success.

On the flip side, you don’t want your leader to be really any less than 12 inches or it started to get pretty close to your sinker and the bottom of the water you’re fishing. That isn’t going to do you any good at all.

Different conditions will have you running different leader lengths. In reedy water you’ll probably want to close things up a little bit, but in clear, soft, rocky bottoms you might want to stretch that leader out a little more.

How to Fish the Carolina Rig

When you have a Carolina rig set up at the end of your rod you won’t be doing a lot of casting and waiting.

Instead, you’re going to want to have constant slow motion on your line to draw the fish to your bait. Fire the line out a good chunk always from the shore or the boat you are working from and then slowly crawl that line, that Lure, and that weight back towards you.

Another tip is to not use the real so much to move the bait as you use the rod. Hold your rod out so that it is parallel to the water in the direction that you are casting your rig and then move things back and forth – kind of like your jigging or dancing the bait along the bottom.

At the end of the day, you have to trust that the decades and decades of success the Carolina rig brought to the table is going to do the bulk of the heavy lifting for you.

There’s just something about this unique combination set up that drives big bass crazy, makes them hit time after time after time, and turns even amateur anglers into big bass pros almost overnight!