You’ve set your cast, hooked a big one, and won the fight of reeling it in. What’s the next step? Bringing that bass out of the water. That’s the only way to get the glorious photo you’ve been waiting for.

For the beginner or the ill-informed angler, however, this might not be the easiest of tasks. Extracting the bass from the water and holding it correctly can be difficult and harmful. And this goes for not just for you but also for the fish.

So how do you go about it properly? There are a couple of ways, and we’ll break down the fundamentals, discussing the different ways of holding a bass and just why it matters. This is all in the hope of bettering your appreciation and your approach toward one of the world’s best-loved sports. 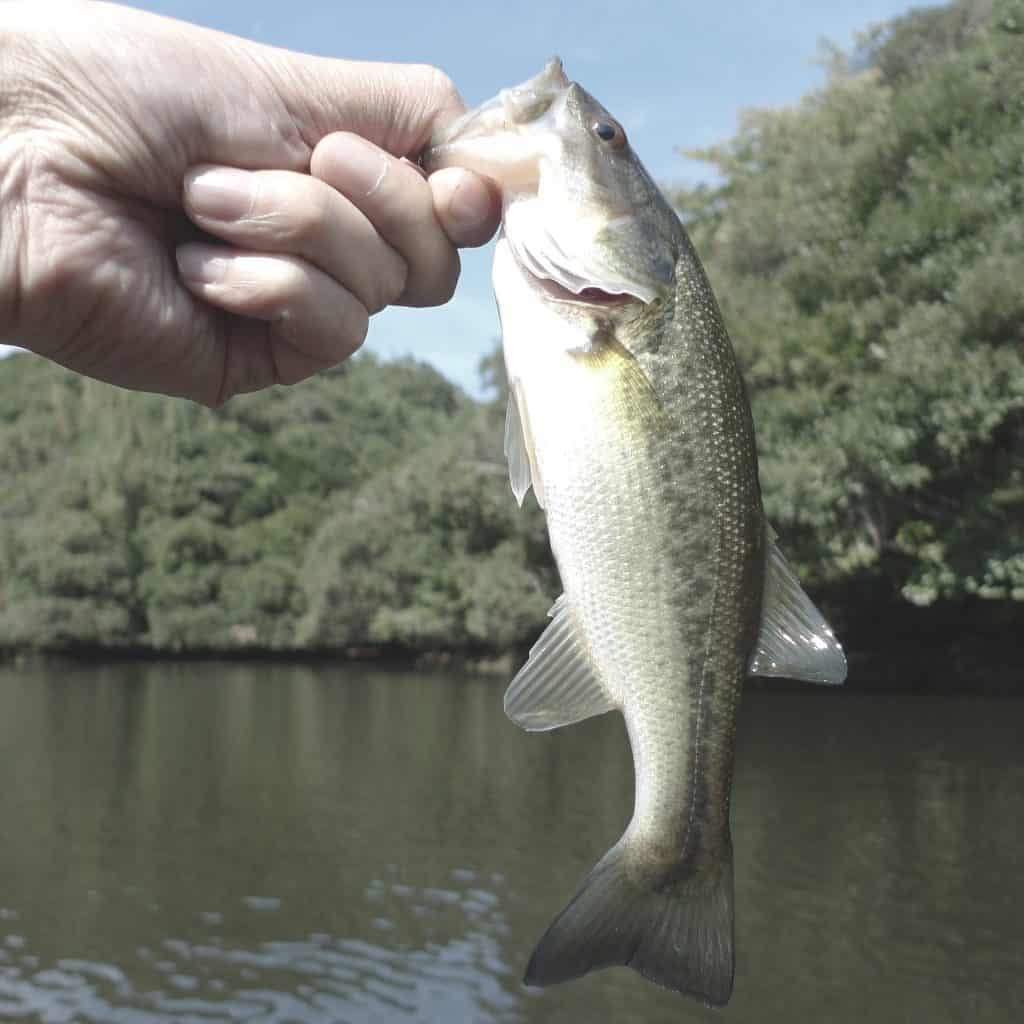 Why Holding a Bass Matters

While fishing can appear a cruel sport to some, most anglers fish with the philosophy of respect towards the fish and caution toward the rivers, lakes, and seas. At the heart of bass fishing is a strong catch-and-release ethos, returning bass to the waters where they live, breed, and hunt. That’s what makes it so appealing to the casual angler.

Fishing this way relies on handling the fish with proper care. Holding it incorrectly, even with small bass, can cause problems with the alignment of its jaws. That means when it’s returned to the water, it could have difficulty hunting and catching its prey the same way it did before.

Catching a fish only to let it slide out onto a bank, rock, or deck could also have a very damaging impact too. A bass’ slime coat, the mucoprotein barrier that acts as part of its immune system, can be reduced and stripped away in this case, bringing it in risk of contact with life-threatening pathogens.

Unfortunately, for someone not used to handling a bass, these scenarios can be quite common. Couple that inexperience with a bass’ razor-sharp teeth (that some anglers can be unaware of) and it’s not difficult to see why such situations occur.

Some of the time it boils down to equipment too. Anglers might forget to bring a landing net or a set of waterproof waders, thus increasing the chance of hoisting a bass to dry land in a risky way that puts the fish in an unnecessary spot.

Before Holding Your Catch

To prevent hurting both yourself and the bass, it’s important to consider a couple of things before learning how to hold it. First, we need to understand the why before thinking about the how.

One consideration we might want to make is if a photo is really necessary.

Sure, if it’s a big fish or an important occasion (like our first bass or our 100th for example), then it makes sense to take a picture. But not every fish has to be handled, except to dislodge the hooks, of course.

If handling a bass is definitely in the cards? If so, this is when it’s useful to think about how to lift it out the water.

There are many approaches to doing this effectively. One of the big favorites is using the sea and its waves to wade out to handle the fish.

Another is to use a fish-grab tool, a device that securely locks a fish’s bottom jaw and assists you in lifting it safely out of the water.

Probably the most popular and effective way is to use a fish net. Just scoop the fish out of the water. This is gentle on the fish, simple for you, and effective

You’ll also want to consider the amount of time you hold the fish out of water. Keeping it out for too long will it cause it to become agitated, increasing the risk of it jumping or bucking out from safety. Holding it in the water with a dependable landing or keep net is a good way to prevent that.

The most common way to hold a bass correctly is by using its own weight accordingly. That means letting it hang vertically from your thumb and forefinger. Keeping your grip firm but not too tight is the key here.

Grabbing the fish’s lower jaw is the best way to approach this hold. This way you’ll avoid the sharp needle teeth of a bass while also keeping your hand clear of its gill plate (avoiding further damage to its respiratory system). It’s also easier to avoid the fin spines this way too.

Holding the bass this way enables its weight to be evenly distributed with its tail directly beneath its mouth. This prevents excessive force from being applied to its jaw.

While the vertical method is generally recommended for smaller sized bass, larger specimens might be handled better with a horizontal technique.

Holding a fish this way enables you to better handle its weight, and it often makes for a more impressive photo too.

Gripping the bass this way is similar to the vertical technique. Place your thumb in its mouth to hold the lower lip firmly before placing your other hand gently on the underside of the fish’s body. Somewhere near the tail or rear fin is best (only use three or four fingers to support the weight).

It’s important not to squeeze the fish at the base. Provide only support with the lower hand.

Holding the bass this way prevents stretching of the body and overextending the lower jaw in large-sized fish. It also shows other anglers best practice when it comes to handling bass, hopefully helping instill the use of this same technique with existing and future anglers.

How Fish Size Impacts How You Should Hold a Bass

Despite these methods being in common use, it’s still not unusual to see a lot of anglers using holding techniques that just aren’t safe or “ethical” for fish. As the natural instinct is to hold the bass at an angle for a photo, this is actually how most harm to the fish occurs.

Holding a fish at an angle greater than ten degrees is going to put a lot of pressure on a fish’s jaw and dentary (its oral cavity responsible for gripping prey), especially if the fish is on the larger size.

If you don’t get the holding technique down right away, it can be useful to have someone demonstrate it to you first. Also understand that even with the best interests at heart, sometimes the unexpected might happen, be it a bad hook or a slip onto the bank.

If that is the case, make sure to know how to revive a fish the right way too. Ensuring you slide it back into the water head first, giving it plenty of time to regain its senses and hopefully swim away.

One final thing to add in terms of learning to hold a fish correctly is that it is never time wasted to learn properly holding techniques. Doing so correctly and ensuring that bass are left in as good condition as possible is one way to pay it forward in the sport. It also helps improve the overall image of bass fishing too.

The more eager angler might not want to stop at learning how to hold a bass correctly, but also how to measure its weight too. That’s one way, after all, of measuring your success in the sport. Keeping track of your personal records when it comes to comparing notes with friends is a fun addition to an already enjoyable sport. There’s nothing like bragging rights!

Weighing a bass on fishing scales, as is customary in the angling world, is not without its best practices also. Learning to do so correctly, while helping give you more accurate readings, also helps the fish in a similar way to holding them.

The best way to do so involves using a sling with scales calibrated to zero and holding the unit at the top by its loop. Then place the bass in the sling after removing the hook and the line safely from the area so as not to catch a scale or erode the slime coat.

Another good tip, especially if the fish is irritable and attempting to flap around, is to place your hands over its eyes. This helps calm the fish, especially when it’s been brought out of the water and into bright weather. Also, minimize holding or touching the fish outside of the sling itself.

Returning a Fish to the Water

Hold the underside of the bass. You’re not holding it tightly, you’re just holding it upright and keeping it from sinking. It may gently wave its back tail at first before it takes off, but keep it supported. Once the fish is ready, it’ll dart from your hands.

Learning how to correctly hold a bass involves using a vertical technique for all sizes of bass and a horizontal technique for a more unique photo opportunity. Doing it the right way is not only good for fish but better for the whole community.

Hopefully, this article has helped inspire you to learn and minimize potential damage to the most important feature of the sport: the bass itself.