Some anglers tend to overthink on their fishing expeditions, wondering which amazing technique or bait they should use to lure fish. Yet, they do not realize that often, the most effective techniques require the simplest components in the tackle box.

We will discuss the elements needed for successful Ned rig fishing.

What Is the Ned Fishing Rig?

Many anglers are confused about when and how the ned fishing rig originated. It seemingly appeared out of nowhere and took the world by storm.

The ned rig takes its name from fishing writer Ned Kehde, who came up with it while fishing around Kansas City waters. Due to the fact that the ned rig’s origins lie in Kansas City, it is also called the ‘Midwest finesse.’

The Ned rig is a variation of an iconic lure known as the Beetle Spin; the only difference is Ned rig has no spinner arm component. 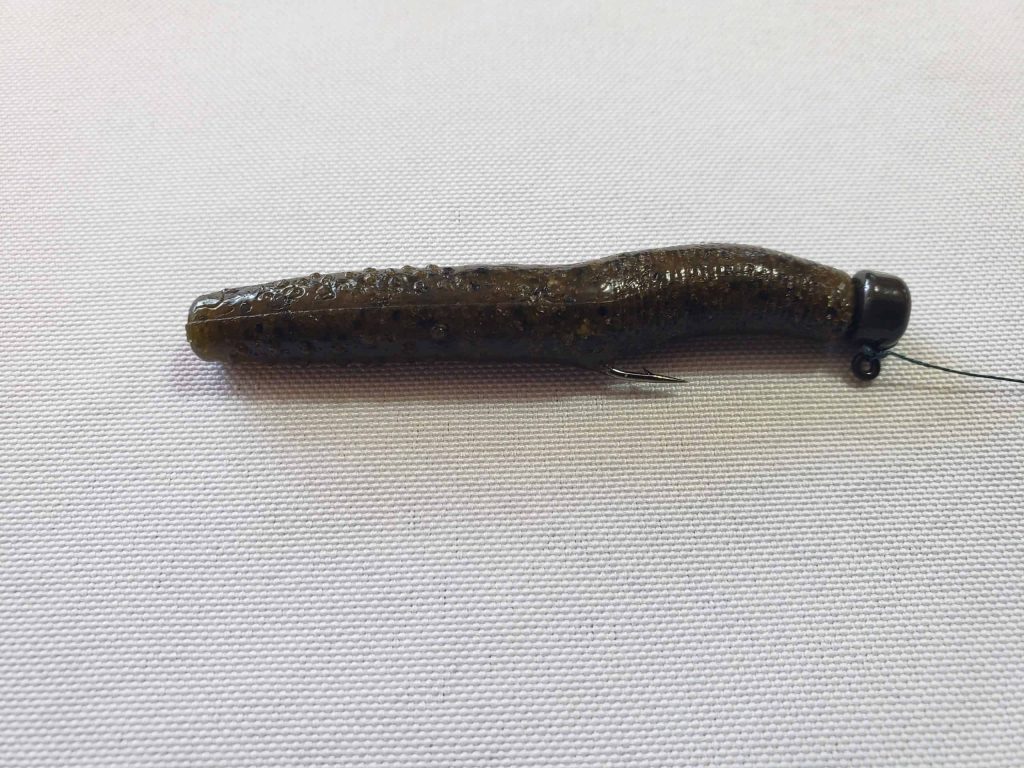 The mushroom-head is typically 1/16 to 1/4 ounces, and the bait is a small plastic worm between 2 ¾ to 3 inches; that is all there is to the Ned rig.

The Ned rig is a versatile fishing technique and can be utilized to catch fish in specific targets such as points or edge of the banks.

It seems to excel in difficult conditions where you need more of a finesse technique rather than power fishing technique.

It also works best in creeks, rivers, and any type of bridge junctions where the water currents are moving fast.

Other places to fish a Ned rig include:

When fishing with Ned rig, there is a possibility that you might catch smaller fish on it. Therefore, your bait must sustain itself after multiple catches.

It is better to have a bait that is durable and buoyant. There are plenty of Ned rig baits on the market nowadays.

There are soft plastics made specifically for fishing the Ned rig. They tend to work best with the Ned rig for obvious reasons.

However, you can definitely use other soft plastic baits with Ned rig jig heads. We’ve had better luck with using baits that are shorter in length rather than longer. 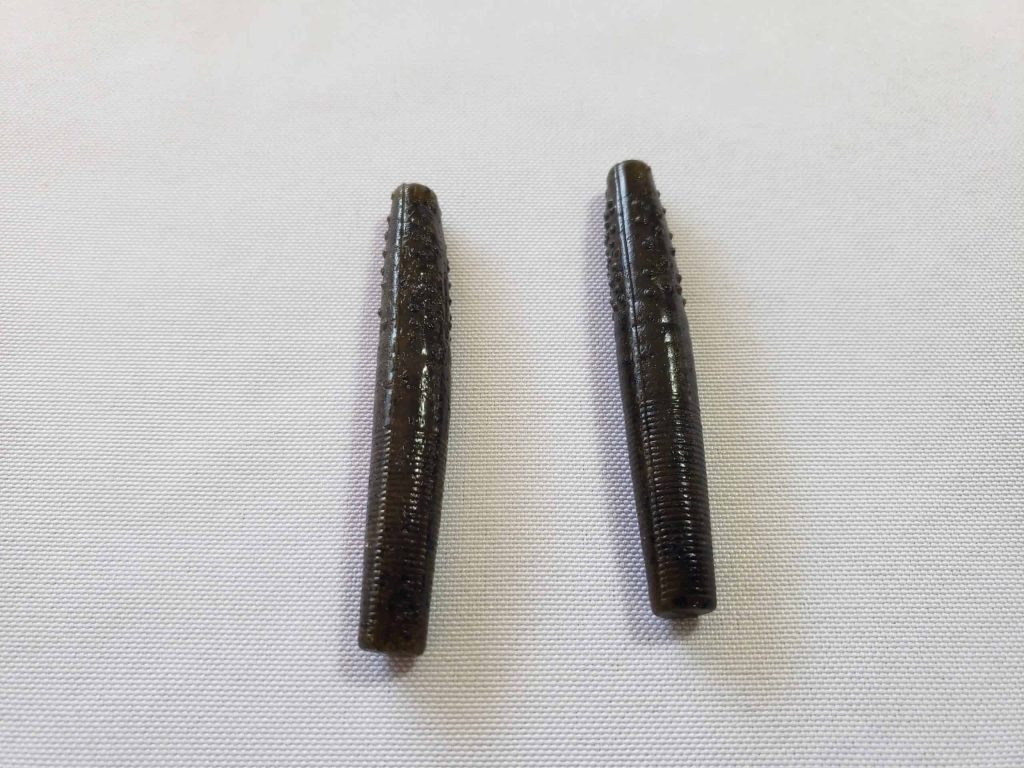 There are a plethora of colors to choose from the options available in the market.

The natural colors seem to perform effectively in clear waters and tough conditions. You could select brighter bolder colors when you are fishing in stained water.

In the end, it depends on the fishing conditions and the body of water you come across.

A spinning rod is an ideal match for a rig. Opt for a medium-light to medium. A lighter rod with small hooks is best while fishing using the Ned rig. This is due to the Ned rig being a finesse technique where sensitivity in your rod is critical.

A light braided line, which is 6-10lb with a 4-8lb fluorocarbon leader, is ideal for this technique. The braided line ensures there is no twist and allows for longer casts while using light-weight jig heads.

There are a few different variations of the jig heads used in Ned rig fishing.

The standard mushroom-style jig head is shaped like a mushroom and has a bait keeper that makes sure the bait stays fastened to the head. The mushroom jig head allows the bait to go through the rocks and other structures without getting snug. 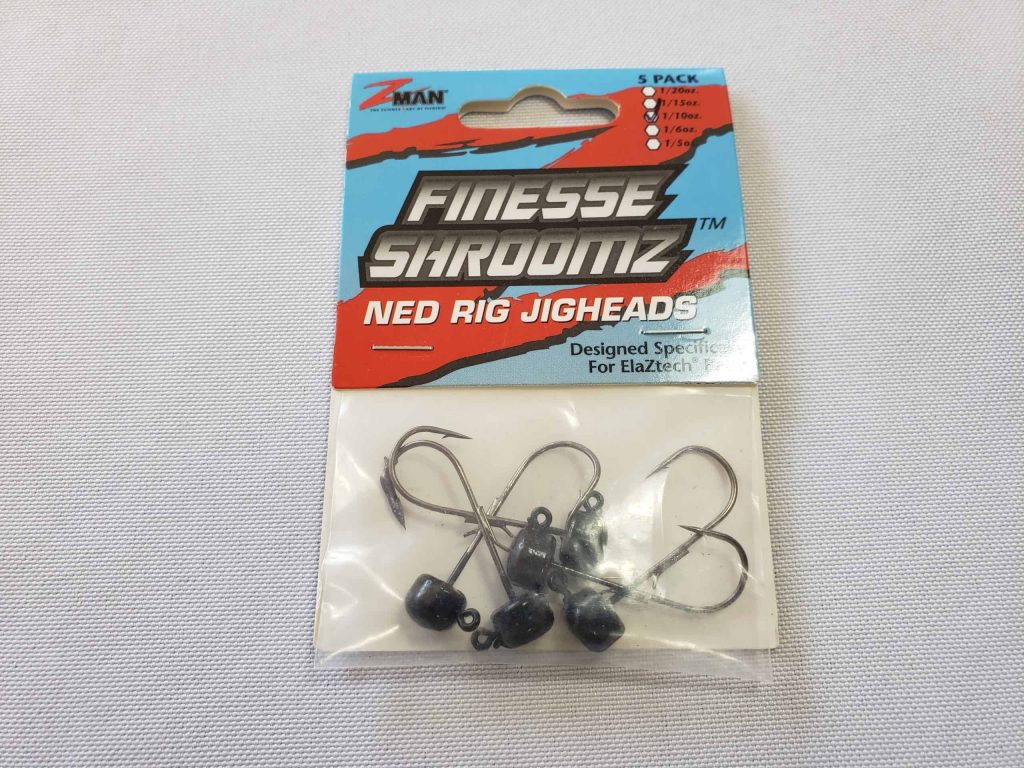 There are two types of weedless Ned rigs; one that comes with a wire weed guard and the second one come equipped with an offset hook. The former does a pretty great job of getting rid of the snags. However, for a weedless setup, jig heads with offset hook are your best bet.

The skirted Ned rig is similar to the standard jig head. The only differing aspect is that the skirted Ned rig adds more bulk to the rig by attaching a skirt to the head. This is used to mix things up a bit and catch a bigger fish.

How to Fish for Bass with the Ned Rig

A variety of retrieve styles are used to catch lots of bass using the Ned rig technique. As always, its best to experiment with these retrieves and experience each one as they are effective in different situations. Below are some different techniques on how to fish using a Ned Rig:

This is used when the fish are feeding aggressively. You simply cast your rig out into the water and let it sink to the bottom.

As it sinks, give it some action by shaking the rod lightly. Once your bait reaches the bottom, shake, and reel your rig back to the boat. Different depths can be used depending on where the fish are swimming or feeding.

This is a fairly simple technique; in this retrieve, the bait does all the work so you can sit back and relax. Cast your rig out and let it sink to the bottom, once that is done move your rod to a 3 o’clock direction and then gently drag the bait towards you. Make sure to the only reel in the excess line.

After casting the bait, let it sink to the bottom and then let it lie dead for a couple of seconds. Give it a shake and then retrieve it. Then, pause again while holding your rod still. Rinse, wash, and then repeat the steps. Sometimes, this is the most effective way of Ned rig fishing.

This is exactly like the drag technique. After launching the bait, hold your rod steady at 5 o’clock position, and once your bait has sunk to the bottom, hop it by turning your reel handle a couple of times and then hold still again. Allow the bait to fall back while shaking the rod. Keep repeating this throughout your retrieve.

Launch your bait and hold your rod between 2 to 5 o’clock. Then, gently turn the reel handle at a moderate speed. You can add some pauses and shakes as these movements can be key players in catching more fish.

Ned rig is a common rig that’s often used for bass fishing, but it also works great when targeting other species. Using a Ned rig is super-effective for catching the walleye, just use the lightest jighead you own and fish slowly. The walleye will not be able to resist.

Some anglers refer to the Ned rig as a ‘do-nothing’ technique. However, over the years, it has helped many fishermen catch trout. All you need to do is use a light jig head.

A Comparison between the Ned Rig and the Shaky Head

Shaky head and Ned rig are both finesse techniques and can seem similar. However, these two rigs differ in size and the style of bait being used. Shaky head baits are usually longer and have a larger profile, whereas Ned rig baits are small.

Initially, many anglers used to scoff at the idea of using lightweight hooks on the jighead and would call them ‘crappie jigs’ until they gave them a go.

It is crucial to use a light wire hook because it maximizes the effectiveness, and you will get more bites. A heavier hook does not only weigh down the bait, but it also causes it not to stand up properly and look unnatural to the fish.

Tip #1: Don’t Throw the Bait Away After a Few Catches

After the bait has been chewed up by a few fish, it forms a slimy coating and has a spongier feel, which is very attractive to the fish. Small tears and wears make the bait flexible.

Many anglers tend to glue worn-out baits onto the jighead, and others stretch the bait before casting them in the water. You can soak the bait in the water to get the same effect.

Anglers love fishing with moving baits and power fishing, and this is what excites them. However, fishing the Ned rig is fun and exciting not because of fast fishing but because of the number of bites you get and how you’ll be able to get a good catch in the water.

Not to mention the fight on light tackle takes discipline; therefore, let the bait sink to the bottom before dragging, hopping, or swimming it. Move it gently along the bottom and then pause it again. Taking such measures will increase the effectiveness of this technique and allow you to catch a lot of fish.

Most individuals are used to hard hooksets as with power fishing. However, having hard hooksets proves counterproductive when it comes to Ned rig fishing since they can bend and get pulled.

Using light wire hooks lead to easy penetration with very little pressure. When you are setting the hook in place, reel tight and lean into the fish; that way, only a little bit of pressure will be required to lodge the hook into the fish’s mouth.

We recommend a small diamond hook since keeping a sharp hook point makes a world of difference in the result.

Many Ned rig bait profiles work perfectly well under certain conditions or at different times of the year. Many soft plastic baits can be used with the Ned rig and provide a better shot at connecting with large fish daily. Have several different baits on-hand and experiment by mixing them up as it will help you succeed.

When using the Ned rig, keep the jig head weight as light as possible. If you use a jig head that is heavy, the bait will plunge past your target straight to the bottom. A lighter jig head will keep the bait in the target zone for longer and will entice the fish with a slow descent that makes Ned rig so effective in the first place.

There are certain occasions where 1/6 or 1/5 oz. weights are used due to the depth of water greater than 20 feet or in forceful currents. However, at the end of the day, lighter weights will produce more bites. For shallow water, such as a pond or lake, opt for 1/10, 1/15, and 1/20 oz jig heads. 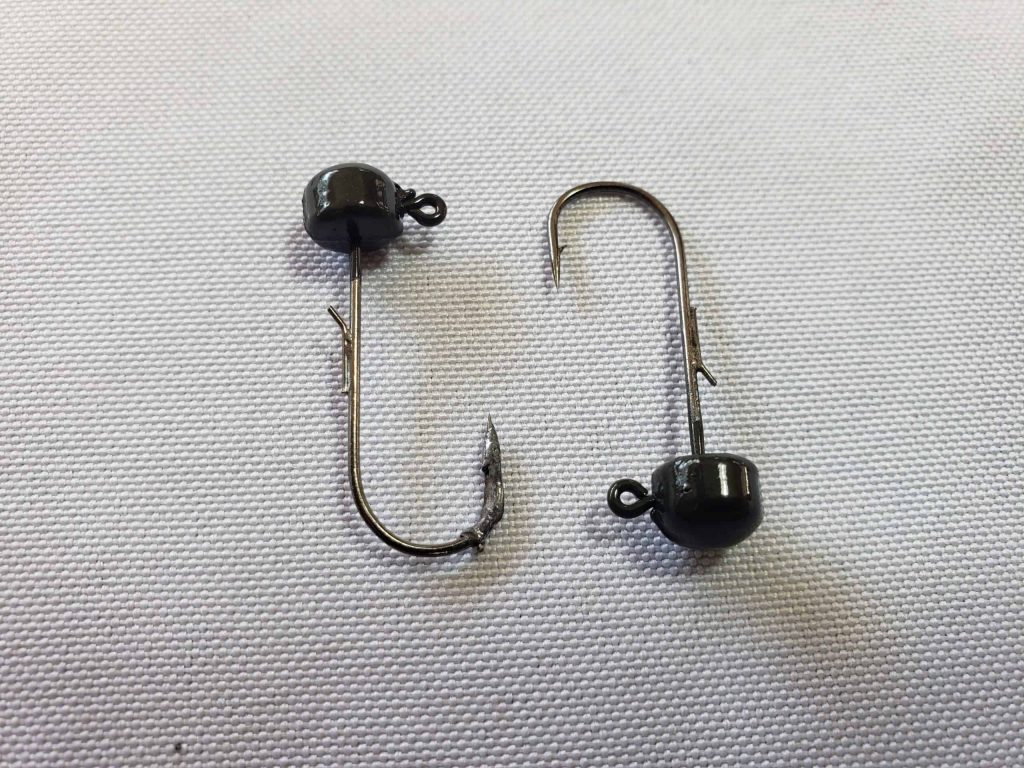 The beauty of the Ned rig is its simplicity, and its ability to fish in several different ways. Generally, anglers use a 1 1/6 ounce jig head but, depending on the conditions you are fishing in, you can easily adjust the setup. Use your imagination, keep the lure within a three-inch range, and you will have the fishing experience of your life.

The Ned rig is an all-around spectacular finesse fishing technique that will get the new anglers their bites even in tough conditions. You can never go wrong with this technique, and we hope what you will apply what you have learned in this article next time you hit the water.