When it comes to fishing gear, anglers have more options than ever for enhancing their fishing experience, and fishing reels are no exception.

Beginners and pros alike can choose from any number of options, such as spincast, baitcast, trolling, and surf reels, to name just a few. But given the variety, figuring out which one is best can be confusing—especially if you’re a novice.

Today, we’re going to compare open vs. closed faced fishing reels for anyone who may be trying to choose between these common fishing reel types. We’ll take an in-depth look at both and discuss their pros and cons.

Without further ado, let’s get started.

What Is an Open Face Fishing Reel?

Our first order of business is to define both of the reel types.

An open face fishing reel, also known as a spinning reel, is one of the most widely used types of fishing rods. When you pick up this type of reel, you’ll notice that the spool (and a majority of the moving parts) is open, instead of placed behind a spool cover. You store line on the spool, and once you cast the line and close the bail arm, it stops uncoiling. 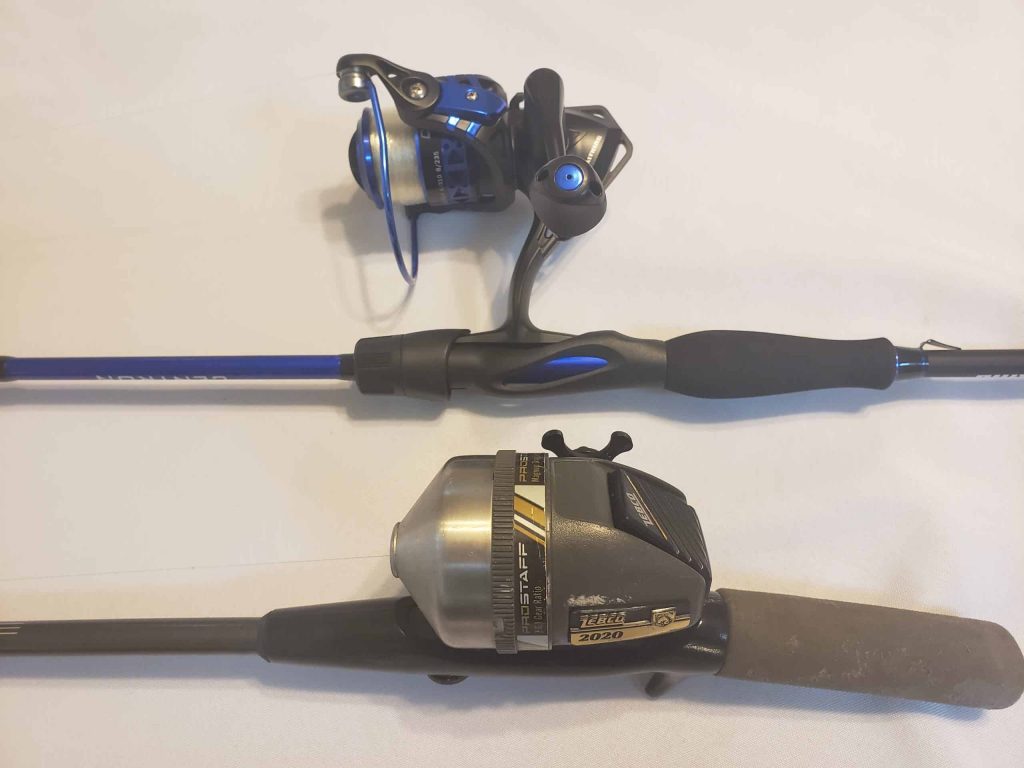 Several features also characterize this type of reel. On open face reels, the reel is mounted below the rod. Typically, the handle locks, which keeps the line from spinning backward and coming off the spool. Additionally, they generally include a wire bail that you can use for distance casting.

While there’s no rule preventing beginner anglers from using this type of reel, it’s best suited to intermediate and experienced anglers. Open face fishing reels require you to use your finger to guide the line as you cast, which takes some practice to get right.

What Is a Closed Face Fishing Reel?

Unlike open face reels that have exposed lines, with closed face versions, you don’t see the spool. Instead, the fishing line is enclosed inside the nose cone of the reel and has a hole in it that allows the line to pass through. 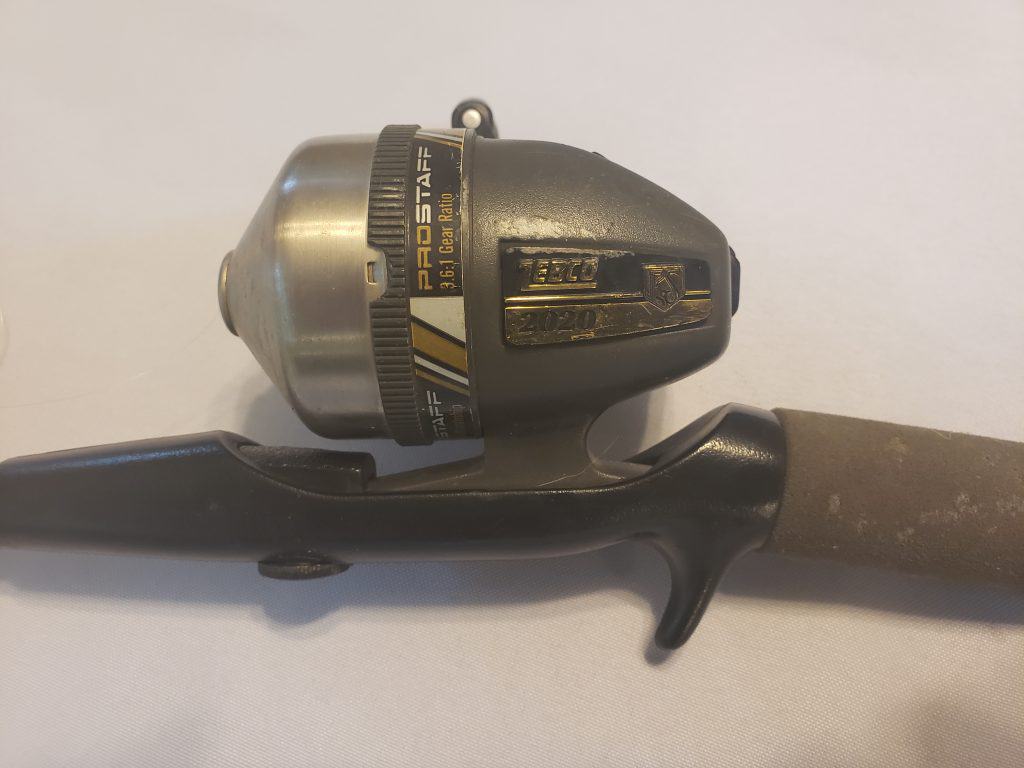 Another difference between spinning reels and spincast reels (as closed face models are also known) is that the latter’s reel is mounted above the handle.

If you fished as a kid, you probably used a closed face fishing reel because of how simple they are to cast. All you have to do is press a button that releases the fishing line. The technique is also much more straightforward with spincast reels. It’s all about aligning the timing of releasing the line and snapping the rod.

Now that you understand the difference between the two reel types, let’s examine how they compare to one another.

Casting is one area where these two types of fishing reels differ considerably.

Closed face versions are much more accessible. Pretty much anybody can pick one up and successfully cast it since the reel does the work for you when you press the button. Ease of casting is what makes spincast reels so popular among beginners and children.

Being able to cast longer distances is a crucial factor in being able to catch bigger fish. Not all rods are created equal when it comes to casting distance. 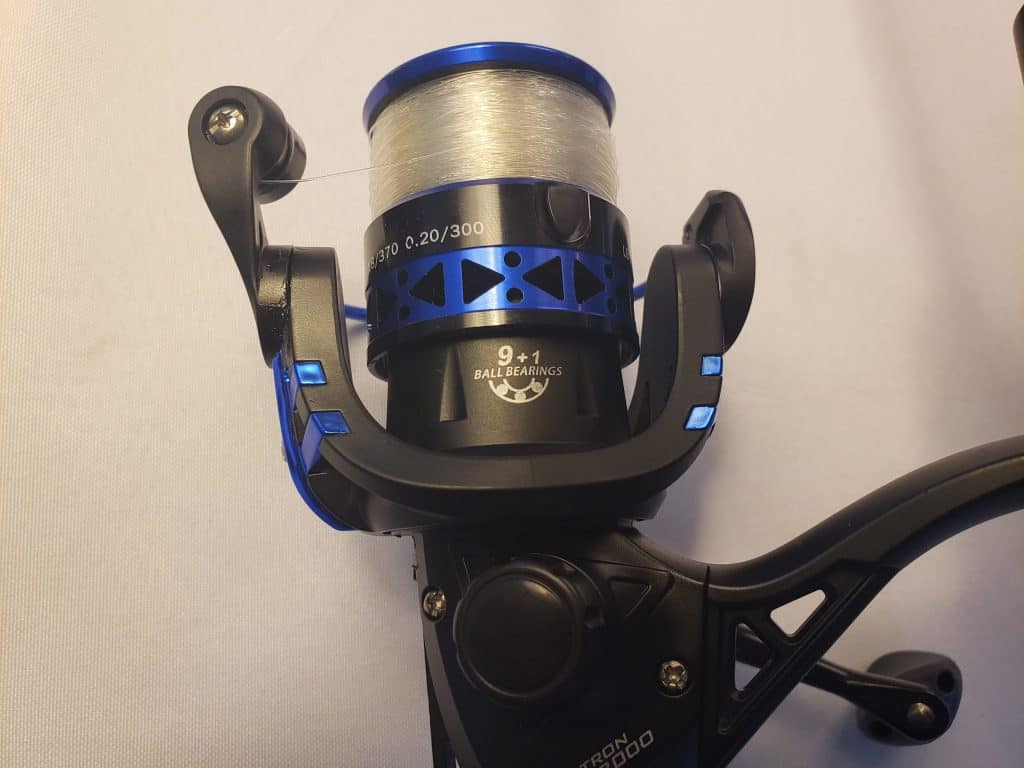 In this case, open face fishing reels are the clear winner. Their open design allows you to store more line on the spool, which is a vital part of being able to cast over much greater distances.

Despite being trickier to use than closed face reels, spinning reels allow you a much higher degree of accuracy once you know how to use them. Sure, novice anglers will take some time to develop this skill, but intermediate and advanced fishers can achieve excellent accuracy with open face reels.

Backlash is a common—and highly frustrating—issue anglers face. This problem, also referred to as “bird’s nest,” occurs when the lure slows after you cast the line, but the spool keeps moving. While this typically happens on a baitcasting reel, it’s also possible on a spinning reel. The result of backlash is a tangled line that you have to spend precious fishing time fixing.

Backlash typically happens under one of two scenarios: when you’re casting into the wind, or when you’re using a lure that’s not heavy enough. The line can tangle either around the tip of the rod or directly on the spool.

It’s much easier for backlash to occur when you’re using an open face reel. Practice, refining your technique, and avoiding practices like putting too much line on the spool can help prevent bird nests from happening.

Closed face models rarely suffer from backlash, though spincast reels are not without their pitfalls. Anglers using spincast reels often have to deal with knots and tangles inside the spool housing.

Serious fishers should aim to purchase the most versatile rod possible. How do these two stack up in the versatility department?

Because you have to use small spools that also have low line capacity, closed face reels suffer from a decided lack of flexibility. They’re good for a select few things, which is catching small fish in one area.

The main versatility issue with closed face reels is that they have low hauling power. You won’t be able to pull a big fish out of the water, especially if there’s any kind of cover like vegetation. If you want to increase your fish-catching capabilities, you should absolutely choose an open face fishing reel.

It’s worth mentioning that spinning reels don’t have exceptional hauling power either (at least not like baitcasting reels do), which means you may not be able to catch super heavy fish (50+ lbs).

Their use in salt-water conditions is also not recommended, but despite these drawbacks, you’ll still get considerably more casting distance and be able to catch small- to medium-size fish.

One area where we can see a significant difference between the two types of rods is in quality. Without a doubt, the quality of open face fishing reels tends to be much more robust. Indeed, inferior quality is perhaps the biggest downfall of spincast reels, which is often reflected in the price.

Sure, there are plenty of cheap spincast models available, especially plastic ones. But if you plan to fish consistently, we’d recommend going with an open face reel, as even the best spincast rods won’t last you very long. Unfortunately, they’re just not designed to stand up to the demands of long-term use.

As we just mentioned, the price of closed face reels tends to be much cheaper. The reason for these lower prices is that these rods have fewer components, are smaller, and are typically produced with less expensive materials.

Their price tag makes spincast reels a popular choice for children. Parents who don’t want to invest a ton of money in a hobby their child may or may not like tend to choose them. Of course, you can find closed face reels that are on the high end, but in general, an open face reel will cost more.

Spending a bit more on a spinner reel may benefit you if you have a genuine desire to learn about fishing and want something that you can grow into.

Lastly, let’s take a look at the pros and cons of both reel types.

While we’d love to say one is better than the other, the debate between open vs. closed face fishing reels has no clear winner. Sure, some anglers might disagree and say that open face fishing reels are superior, but both types serve different purposes.

Children and beginners will feel comfortable using closed face reels, and they can get their feet wet in the fishing world without any trouble. Conversely, more experienced anglers can benefit from the increased control and longer line that open face fishing reels offer, despite being more challenging to use.

Our advice? The best fishing reel for you depends entirely on your intended use. As long as you have a clear idea of how you intend to use your reel, you’ll easily make the right choice.

If you’re an adult, get an open faced reel. If you’re buying for a child, get a closed face reel unless the kid’s been fishing for a while and is indicating they will have continued interest.