Commonly used for precision fishing, where predatory fish call for more control and accuracy, the baitcasting reel is hugely popular in the bass fishing world. Often the reel of choice for professional anglers, it usually edges out its spinning reel sister thanks to its added strength and robustness too.

Getting acquainted with this type of reel is a good step in taking you from beginner angler to more advanced. Here we take a look at the features and components that help make up the baitcaster, as well as suggesting why it can work out to sometimes be a better choice when wanting to take your fishing to the next level. 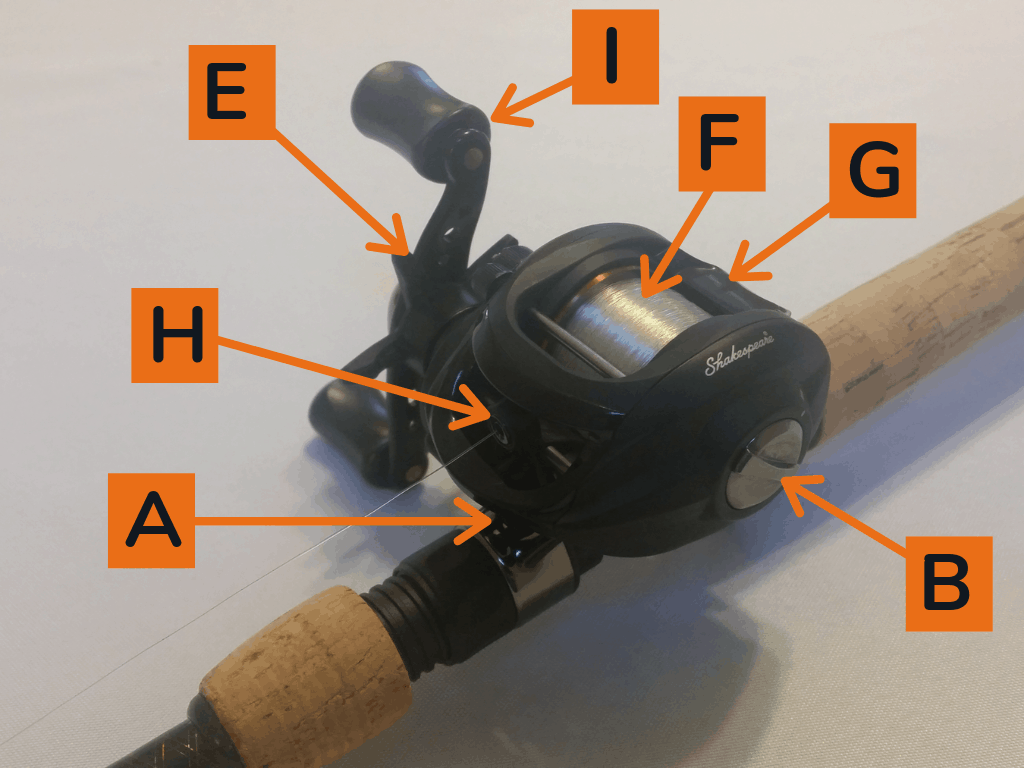 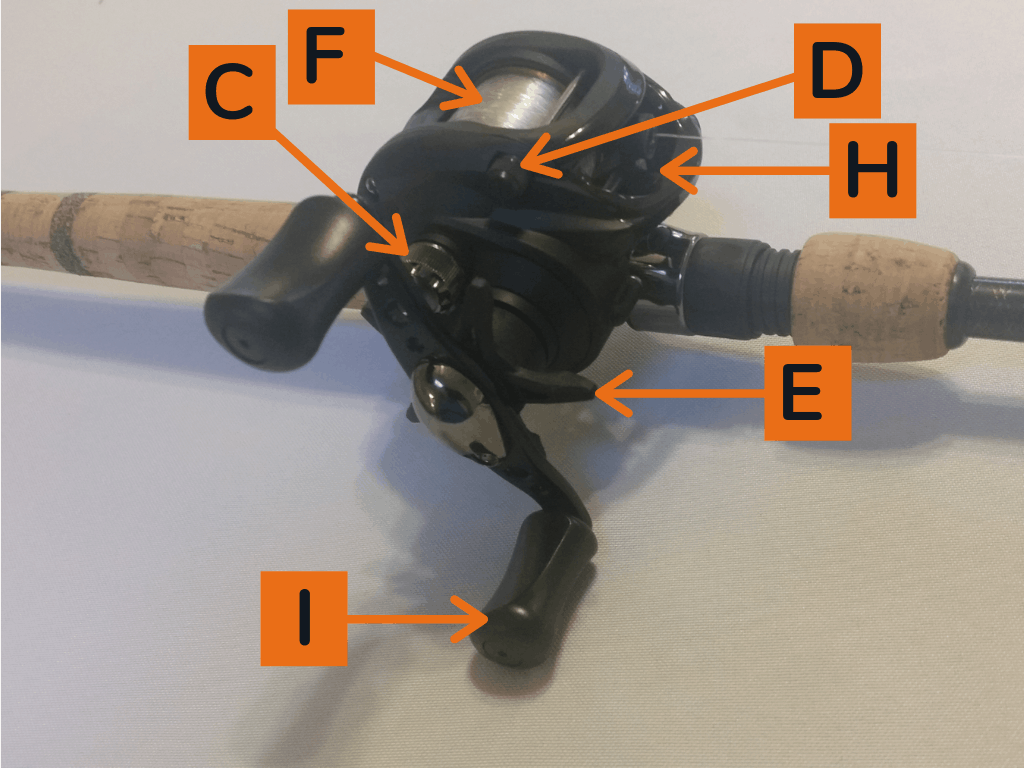 Common on most fishing reels is the foot, the point of attachment between reel and rod. Shaped rectangularly or squarely to fit the frame of the rod holder, it’s integral that a baitcasting reel’s foot is solid, firmly fixed and durable enough to withstand the pressure and torque of casting and retrieving.

One thing you’ll see with the foot on a baitcasting reel is its placement. Fixed to the top of the rod rather than the bottom like the spinning reel, the reel should also line up with a rod’s guides (the metal rings the line passes through to the tip). This placement ensures the line comes straight from the starting guides and passes into the water for smoother and a relatively friction-free cast.

The reel foot of a baitcaster also pairs up with the reel seat. This is the part of the rod that houses the reel and usually has a threaded keeper that is moved down by hand to fix the detachable reel into place. Ensuring these two components match up is critical in ensuring that neither part separates.

One final thing to keep in consideration in terms of the foot is ensuring the nut is tightened on the rear socket. One particularly useful pro tip involves double checking this before making your first cast into the water.

Baitcasting reels commonly either have centrifugal or magnetic breaks, with each acting slightly different. Magnetic tend to be simpler to operate which often leads to them being priced above centrifugal models.

Reel brakes are located on the side of the reel. This location has the advantage of being easily accessible to the angler’s hand so that readjustments can be made quickly and timely. This enables the initial spool speed to be adjusted quickly and also to control the rate of deceleration (which if too fast can cause messy line tangles) at the waterside itself.

The function of brakes give way to two major components; the initial brake (larger and more adjustable) and the deceleration brake. Centrifugal brakes use a system of blocks inside a ring to reduce friction. This makes the force of the brake proportional to the square of the speed of the spool.

Magnetic brake systems use moving metal magnets and electromagnetic forces to slow the spool speed down. This system is usually controlled by a dial on the side of the reel that is tightened or loosened during the cast. Depending on the manufacturer and the specific model, this dial is sometimes numbered, but sometimes it’s not.

Brake systems are usually adjustable too and can be altered by “popping” one or two screws on the reel body to access the metal components themselves.

Like reel brakes, cast control knobs are also essential in helping maintain a smooth cast with no backlash. Used to adjust the line speed coming off the spool, cast control knob designs depend on the manufacturer but can vary from one single knob to several. More often than not they are located next to the reel handle itself. You may hear this knob called the spool tension knob.

Generally adjusted for specific lures, cast control knobs can be rotated by the fingers to increase or decrease speed. Metal and colored to match the reel body itself, these knobs are also replaceable for different sizes or designs based on the anglers preference. Like the brake system, they can be removed by continually rotating the knob until it is completely loosened.

Spool tensioners are used to ensure the spool stays tightly fixed to the reel body and that the line moves freely on and off it.

Generally located on the bottom of the reel body, the tensioner can easily be mixed up with the cast control knob but is usually smaller in size. Testing adjustability is best recommended to be done with a lead sinker tied to the line outside of the water. That way you can get an idea of the tensions sensitivity and set it at something close to preference ready for your first cast.

This method is also well suited for beginners new to baitcasting reels who want to avoid backlash. Allowing the sinker to drop and hit the floor without any line continuing to run off the reel can help solve this problem.

The drag control is another button or knob (usually starfish shaped) on a baitcasting reel often situated on the right side of a reel close to the friction control buttons (tensioner and cast control knobs). Playing with this setting is another way of effectively controlling backlash and reducing the time you spend fixing tangled line.

Drag setting is important when it comes to playing a fish and retrieving the line on a catch. A line with a lot of tension (minimal drag) can break a lot more easily than a reel that gives a little drag allowing a bass to pull some line off the reel. Testing the drag can be done simply by tugging the line with your hand and physically trying to pull it out.

Line that buries itself into the spool with very little give can cause a host of problems when it comes to backlash. Making sure the drag control settings are eased to a point where there’s less tension can drastically improve an angler’s catch rate.

Oftentimes the drag control of a baitcaster is referred to as “star drag” due to the shape of the feature.

The spool is potentially one of the most important parts of a reel and is the site where the fishing line itself is held and stored. One of the features of the baitcasting spool itself, unlike the spinning reel spool, is that the spool itself rotates instead of moving up and down. Thanks to this design baitcasting spools can handle more pressure making them much better suited to heavier set-ups or going after bigger fish.

The spool design of a baitcaster is often what makes it a favorite of professionals in the sport who opt for lures like jigs that sit deep in the water and are bumped across the bottom. This style of fishing generally calls for more robust and durable tackle as both line and lure are likely to come into contact with underwater obstacles more often.

Despite this advantage spooling a baitcasting reel, especially for a beginner, can be quite tricky. Ensuring a spool’s surface is smooth, clean and free of any other material should be the first point of action. From there the line can be fed onto the spool using slight tension and your index finger and thumb.

Spooling the line is one of the most important things you can do when setting up your rod and reel. Line that has been spooled incorrectly or with insufficient pressure can very quickly loop off the reel, tangle, and break.

The thumb bar of a reel that works in conjunction with the spool, the ball bearing system and the anti-reverse function of many baitcasting reels.

Replacing the thumb bar on a reel, although inexpensive, can be tricky as it’ll have to match the reel manufacturer and make itself. Due to its placement inside the body of the reel, different dimensions can cause adjustment problems.

The line guide is a useful feature of a baitcasting reel that enables the line to freely move out into the water during the cast and back again during the retrieve. Ensuring the line doesn’t unspool irregularly and cause tangles is its principal function, as well as keeping friction down and reducing line breakage.

The first part the line passes through on its way to the last eyelet of the rod, it’s important the line guide functions correctly and is properly constructed as part of the reel body. Sitting in front of the spool, the line guide is a moving component to a baitcasting reel and shifts forward and back as the line is fed on or off the reel.

Analogous to the power roller on a spinning reel, the line guide moves back and forth left and right as the angler rotates the reel handle. This motion is often described as being similar to an “old typewriter”.

The reel handle is an obvious part of any reel is the main interface between the hand and the reel itself, ensuring the working of the line. Baitcaster reel handles function the same way as regular fishing reel handles, responsible for moving the interiorly located gears and, in turn, the spool.

Comfort is often important when it comes to the handle as this is the part of the reel an angler will be touching and using most. For that reason, baitcasting handles, just as spinning reel handles, often have two knobs for the thumb and forefinger grip. In terms of material, the handle is constructed from the same or similar metal as the body itself.

Handles, although replaceable, vary in quality based on their material construction. Aluminum handles are usually standard on baitcasting reels and do a good job at holding up for long periods of time. Reinforced metals are on the higher-end of the market and provide a very robust and dependable material for keen or professional anglers that need something even more heavy-duty.

A long gear that runs the length of the reel, the pawl can be found by flipping the reel over and looking above the spool.

The paul is located just below the line guide. Just like the line guide, the pawl is another moving part of a baitcasting reel and is the precise part of the line guide responsible for moving the line back and forth ensuring even distribution of the line on the spool..

Breaking this part of a baitcaster reel is largely responsible for monster knots and reel damage.

Another common feature that baitcasting reels have over spinning reels is the baitclicker. This is a switch on the left side of a reel that creates a clicking noise indicating increased line tension. Its function is like that of an alarm notifying an angler of a fish taking the lure but sometimes can also signify the lure being bumped or caught up on an obstacle.

Bass anglers that like to fish with more than rod often find this feature useful as the alarm sound means they can focus on another rod safe in the knowledge they won’t miss a potential catch.

Baitcasting rods, although largely similar in form and function to most other fishing reels, offer a remarkable level of control for anglers looking to step up their game and get more serious than their spinning reel origins.

Now you’re more familiar with all the parts and features that help achieve that, it’s now over to you as to whether you choose to give the baitcaster a try.