Spinning reels play a big part in bass fishing, especially among those anglers who enjoy lighter lines and lures. They’re also a major part of the fishing set-up, primarily responsible for storing line and ensuring the cast is as smooth and accurate as possible. A great reel makes angling all the more enjoyable.

For those unfamiliar with what a reel and it’s different features do, however, it can be hard to understand just how big of a role it can play in terms of catching and landing fish. Here we’ll discuss all the major components and parts that make up a spinning reel. Hopefully helping to solidify and better your understanding.

The reel handle is one of the most important components of a spinning reel. Rotated by the hand to bring (retrieve) the line back to the rod after the cast, the handle should be smooth and comfortable to the touch. Most handles can be operated by the right or left hand, depending on where it’s fitted to the sockets of the reel body.

Bass anglers want a really dependable handle that can stand up in all weathers and rotate the spool with minimal effort. Some handles have rubber grips to prevent slippage but mostly all are made of graphite, aluminum or some other metal that is designed to withstand pressure and torsion.

Usually, the handle is spun in the non-dominant hand while the rod is held in the dominant.

Anti-reverse levers are another handy addition on spinning reels which prevent the handle moving while a fish pulls on the spool and takes out more line. Reel handles can also be purchased separately and are easily replaceable should you have issues down the line.

A few final things to consider about the reel handle include weight and length.

Light reel handles which generally have a quicker response time and allow the angler to adjust their retrieve easily. This is important in bass fishing where different fishing techniques can come into play depending on circumstances and conditions. Longer handles add to the overall weight but are necessary if you need to maintain a stable grip or have particularly big hands.

You’ll also see double-bodied handles on a lot of baitcasting reels although single handles are more common on spinning reels.

A reel body or frame refers to the same thing; the reel’s central component and the focal point that holds all the features together. In most spinning reels the body is made up from the support arm, foot, and gear box housing. Sometimes there are additional components depending on a particular manufacturers design.

Usually made out of graphite, aluminum or plastic, bass anglers tend to opt for the more robust metal-bodied reels as they tend to be more durable over the course of time. Although open to the problem of rust, the extra price you’ll pay for metal over plastic is oftentimes worth it as the reel is much less prone to bend, warp or fall apart with overuse.

Obviously reel bodies differ in shape, size, and composition and you’ll find many variations in the spinning category. This part of the lure is also highly customizable so you’ll often see the design flair of a certain manufacturer with colors and finishes on the body too. Weight again plays a factor and is highly dependent on the main material the body is made from.

Next to the reel handle in terms of overall importance is surely the spool. This is the main part of the reel that holds the line. It’s also the part that can impact on how successful you are bringing a fish in. Especially if the spool is too rigid and creates too much friction on the line where breakage will inevitably result.

Spools on spinning rods are usually made from graphite or aluminum, much like the handles and bodies. Line is secured on the spool by being woven around the axis. Oftentimes tackle shops provide a service doing this for you but it’s also a good idea to learn how to do it for yourself. Especially if you plan on changing up your gear often.

One thing to think about when considering the spool is the type, length, and weight of the line you plan on using. Spools usually have a capacity for certain dimensions, meaning long distance and heavy test weight lines might struggle to fit on smaller sized spools. You can check for this on the reels specifications. 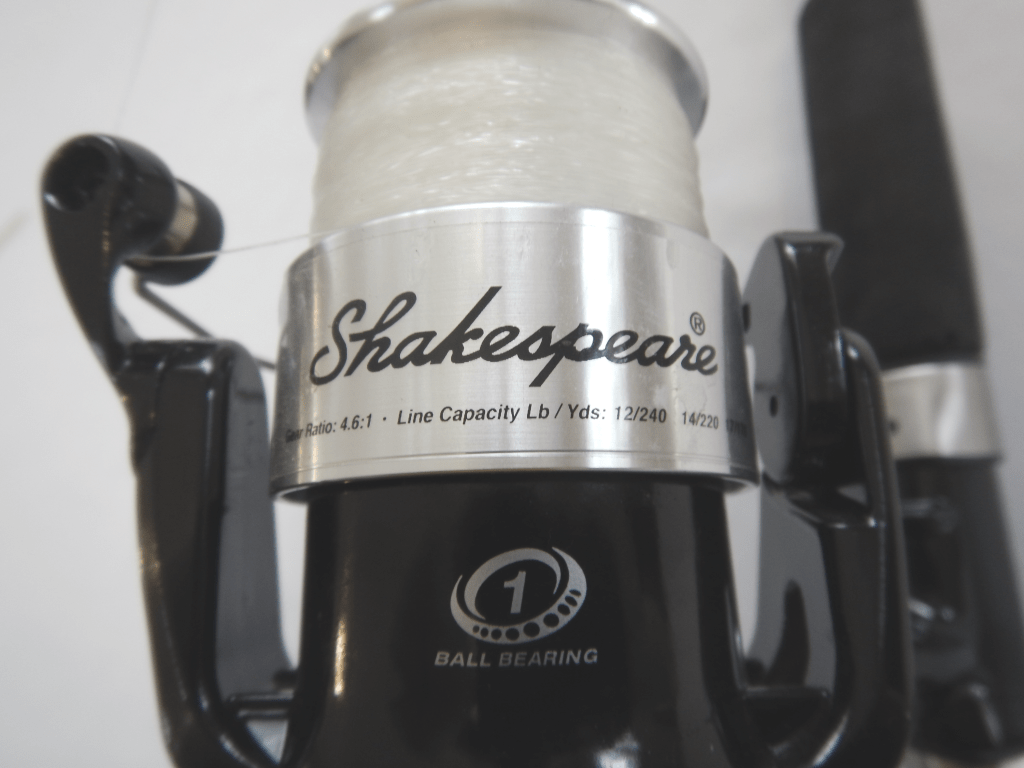 Spools are also sometimes a pain point for anglers given that they’re the point of the reel where line is most prone to tangle. Line that is not properly spooled or runs off a reel awkwardly can cause such problems. So can badly made spools that are cracked or warped and don’t allow the line to “run off” properly.

A common feature of the spool, especially in spinning reels, is the drag adjustment knob. This is a button or set of buttons that can be pressed by the finger allowing the angler to increase or decrease the amount of friction, or drag, on a line. This is hugely important in bass fishing where the fish tend to fight and pull the line back out into the water.

The drag system itself is a set of metal washers that can vary in number depending on the manufacturer or the system in place. As spinning reels have an “open-faced” spool (meaning its exposed and you can visibly see it rotating) you’ll often have to get a feel for the rod and reel combination first before adjusting the drag appropriately.

A drag adjustment knob that’s easy to find is much easier to work with for the novice angler. On spinning reels, the knob is usually positioned close to the reel handle for that reason. Enabling you to make fast changes on the fly while in the middle of a cast and retrieve.

The reel foot is the bridging point between the rod and the reel. It’s important that it fits the reel body tight in order for both components to stay firm during the swift action of a cast and withstand the tension of a fighting fish on the retrieve.

The standard reel foot is rectangularly shaped to fit the placement on the rod. It’s also usually an extension of the reel body itself, made out of the same material like graphite or aluminum. Although the standard ensures most reels fit a rod frame but there’s often leeway in terms of how close the actual fit is.

To ensure that reels and rods match then, novices should understand that there’s no better test than actually shopping for both components together and ensuring one fits the other.

Reel seats refer to the part of the rod that the reel foot sits inside. This is often a hollowing on the rod frame itself or could be demarcated by metal fittings designed to hold the foot in place. Reel seat design varies by manufacturer which means that sometimes this part of the rod will often have a different finish.

Gears are one of the more overlooked components of a spinning reel but are hugely important in helping smooth out the action of a reel and avoid nasty line breaks. Circular metallic components that sit in the reel body, gears are usually crafted out of zinc, brass or aluminum. Stainless steel also sits at the premium end in terms of materials.

Gear cuts are often down to the manufacturer, with certain brands having cut their gears the same way for decades. Although not hugely influential when it comes to a reel’s performance, it’s still nice to know that gear cut shape and material is considered when it comes to improving a reel’s overall quality.

Gears also play a fundamental role in determining the key characteristic of gear ratio. This is something that anglers pay close attention to as it determines how many rotations of the spool a single turn on the reel handle is going to deliver.

In spinning reels, the gear ratio tends to sit between 4:1 and 7:1. The first number in the specification relates to the number of rotations per single turn of the handle.

Thicker gears make for stronger gear mechanisms, enabling the load to be spread across a larger surface area. When fighting fish like bass, that can vary widely in weight, that’s something to keep in mind. Thin, narrow gears might not have enough power to bring in the big bass that some anglers prefer to target.

The bail is a unique feature of spinning reels that helps make the casting mechanism all the more easier. Designed to help move the line on and off the spool, the bail reduces the backlash problem seen on other reel types (like the baitcaster) by ensuring line cannot run freely off the spool as long as the bail arm is set down.

The bail sits on the reel body anteriorly to the spool and can be either flipped up and down by hand. First developed from wire, modern-day bail arms are thin metal components that are affixed to the reel body itself. Well designed reels should have bail arms that are easy to open and close, have little resistance and are solid enough to withstand repetitive use. 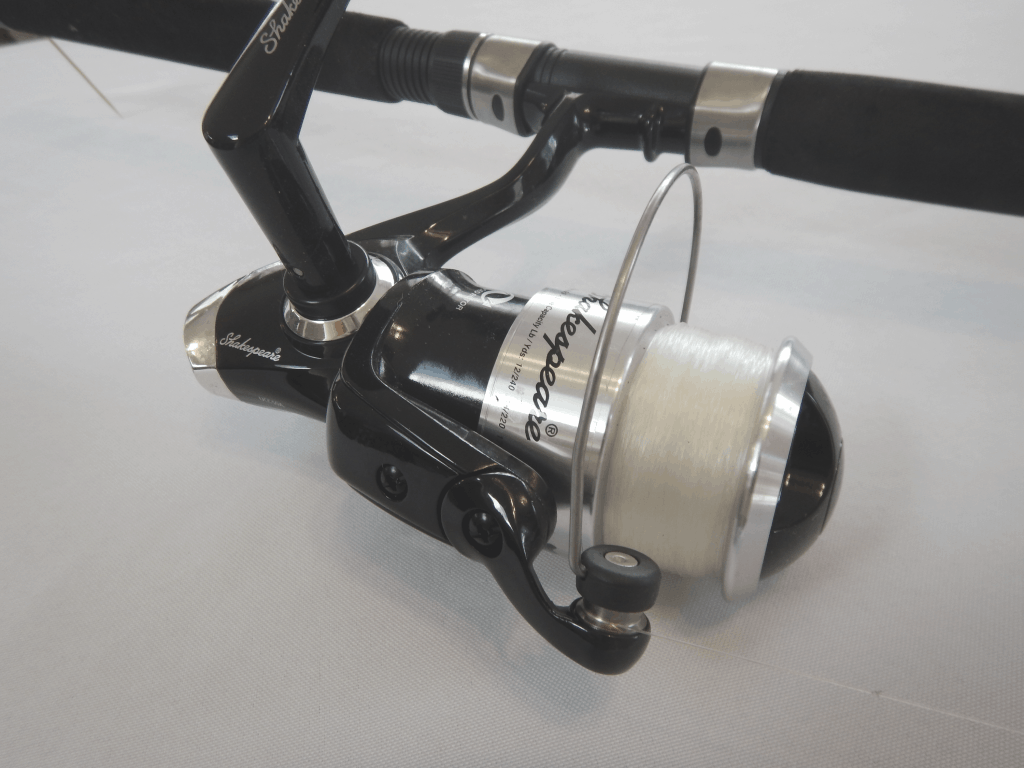 The line roller adds to the overall feel of a spinning reel by being the contact point of the line as it is reeled in from a cast. A lot of friction provided by uneven edges or rough surfaces is something that all anglers want to eliminate. Especially if they’re to avoid the line being weakened or broken off.

A line roller that enables the line to move freely without sticking is one that works effectively. Pros encourage using a toothpick to test this. Placing one against a roller and assessing whether it moves freely being the main idea.

Another thing a line roller does is help to eliminate line twist by forcing potential twists forward toward the working end of the line. Rollers that aren’t maintained can complicate this issue and make twist a more frequent problem.

Anti-reverse is a feature of a reel that engages the drag and prevents it from turning backward. This is important on spinning reels in bass fishing where the fish are prone to fight and pull the line out. Line forced backward could cause a whole host of issues concerning unruly tangles, breaks, and snags.

Usually, spinning reels have a switch that enables the angler to set on or off this feature depending on their preference. Back reeling, when the feature is disabled, can mimic a drag system and allow line to be fed out back to the fish loosening tension. This gives more flexibility to the angler allowing them to change their approach based on experience.

Spinning reels, although they have lots of working parts, are simple in essence. Designed to hold line, and to cast and retrieve with ease, they’re often the first port of call for beginner or novice anglers looking to get started in the sport. Easier to handle than their baitcasting brother, spinning reels offer similar advantages but with a smaller learning curve.

What they lack in accuracy or precision they make up for in reliability, durability, and ease of use. So much so that plenty of professionals continue to opt for them over other popular alternatives.