Knowing the differences in species between the bass you target not only helps you become a more knowledgeable and experienced angler, but it also helps you understand how each species behaves too.

In bass fishing that can help a great deal. Allowing you to better tailor your approach and improve your catch rate in waters teeming with one particular species over another.

But, as is often the case in fishing, things aren’t that straightforward. Telling apart separate species, especially in the case of the spotted and largemouth bass, can be a tricky endeavor.

Breaking down crucial similarities and differences between these two individual species? One way that can certainly help.

Hopefully, the following discussion over factors like appearance, behavior, habitat and more, will soon have you picking them apart with ease.

Starting with the largemouth, also known as “bigmouth,” “green trout,” “lineside,” and “black bass,” is a good place to start. 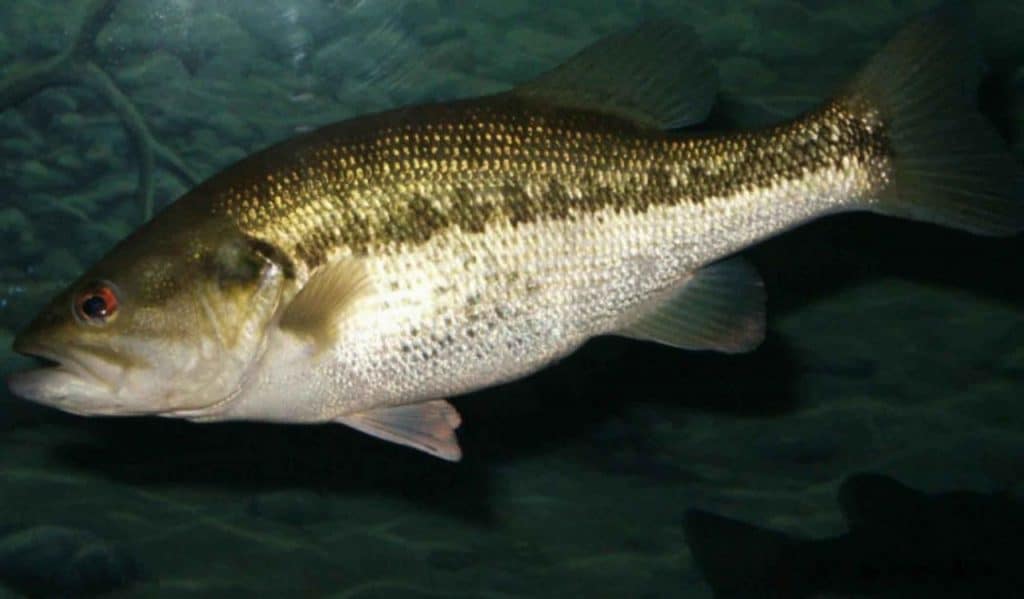 It’s this species of bass that most big-name tournaments focus on. This is primarily because they tend to grow to the largest size but also because of their wide distribution in waters across America and beyond.

The top predators in their ecosystem, the largemouth can reach up to 16 inches (40 cm) in length during year three of their growth.

This dramatic increase in size is significant given their average length in the first year of life (4 to 6 inches) and is mainly attributable to them becoming predatory at around 2 inches in length.

Before that largemouth fry mainly exist on insect eggs and larvae as well as zooplankton.

Green in color, largemouth are most easily identified by the dark bars or blotches that align in the form of a horizontal stripe on the middle of the species’ body. On the underside or belly of the largemouth, this coloring is usually paler, ranging from light green to white in variance across specimens.

Another useful way to identify a largemouth over other species is by paying close attention to its fins. The dorsal fin, located on the spine or back of the fish, is divided in a largemouth, forming anterior and posterior sections.

Counting the spines on this fin, the posterior portion usually has 12 to 13 soft rays whereas the anterior part commonly has nine.

Spotted bass also have a rectangular “tooth patch” on their tongue which can be felt by an angler with the thumb or forefinger.

Spotted bass, just like largemouth, are also known by other names. “Kentucky” is one way you’ll see the spotted commonly referred to, namely because of its once-dominance in the state.

Unlike the largemouth, it also tends to have smaller scales on its cheek in comparison to the remainder of its body as well as lines of “spots” along its stomach rather than the horizontal markings of the largemouth.

Despite these nuanced differences, and given the fact they can inhabit the same waters, identifying the spotted bass from the largemouth still remains inherently difficult in the bass fishing world.

Most anglers will have to take them out of the water before getting anywhere close to telling which is which.

Where appearance might be tricky to discern, location and habitat can help. Oftentimes, depending on where you fish in a body of water, you may be able to guess what species is most likely to appear in that area, and the same can sometimes go for region.

Largemouth bass, given their predilection for areas of cover, are commonly caught in areas where submerged logs, grasses and other obstacles exist. They also prefer still and calmer waters over flowing rivers or streams.

Spotted bass, in comparison, are more likely found in areas of slow-moving waters such as small rivers and streams. Lakes are one area they are rarely found in, as well as brackish waters. Generally, they prefer cooler waters than their largemouth counterparts.

Region-wise, largemouth can be found all over the US as well as areas of Canada and Mexico. Due to introduction schemes and the rapid growth of bass angling as a sport, their distribution has grown even wider, reaching as far afield as Japan and Europe.

Spotted bass are native to the Mississippi river basin and the Gulf states, specifically frequenting waters in Florida and Texas. Mid-Atlantic states such as Virginia and North Carolina also have strong populations of spotted bass while parts of South Africa even have populations due to introduction programs.

Interestingly in Texas, one of the most popular states for bass fishing, the largemouth species can be classified into two further subspecies. The Florida Largemouth, considered one of these subspecies, exists thanks to introduction initiatives set-up by the many bass angling societies, clubs, and businesses based in the state.

Spotted bass subspecies have also evolved with slightly differing behavioral and physical characteristics. Largely thanks to different features of the water they inhabit, spotted bass are particularly resilient and have adapted to wide-ranging conditions in similar fashion to the largemouth.

Understanding this, as an angler, gives you a greater insight into nature and the development of a species itself.

The behavior of fish is what makes bass fishing the fun it is.

From hard fighting fish taking the bait all over the water during spawning season to the shy winter months of hibernation, understanding a little about fish behaviour can certainly help you go a little further when it comes to improving your catch rate.

Behavior can also be a major clue in separating spotted and largemouth bass species before having pulled one out of the water.

Observing how they respond to a cast, retrieve and the design of a rig; not only help to tailor and fine-tune your overall strategy but can also give an indicator as to what species of bass the water you’re fishing is occupied by.

Largemouth bass, due to their increased size, can be a little more sluggish than their spotted counterparts when it comes to hunting and stalking prey. Although they pack more power, they’re less likely to dart out or chase a spinning lure by comparison. In warmer temperatures, this is even more exacerbated as the largemouth sits deep in the cooler areas of the water in an attempt to conserve energy.

One way of telling a largemouth from a spotted after hooking is the largemouth’s tendency to rush to the surface of the water, jump, and rush. Spotted’s, on the other hand, usually dive deep and look to seek refuge in or around underwater obstacles in the hope the threat will go away.

Spotted bass can also be differentiated from the largemouth in their tendency to school up with other fish in the same area of water.

For an angler unsure of the presence of a school, a repeated cast into the same area that attracts bite after bite will soon uncover them. Fleeting and more spaced takes of a lure, however, are generally a strong indicator that there’s an independent largemouth in the vicinity.

Uncovering the key differences between the spotted and the largemouth, it’s sometimes easier to tell them apart depending on what season you find yourself fishing in.

Late May and early June are the periods of spawning for the spotted (though this can vary depending on your latitude), meaning that fishing around late spring and early summer are the best time to improve your catch rate.

Largemouth, on the other hand, tend to spawn slightly earlier in the spring. Fishing during April and May (once again depending on your latitude) is generally recommended when it comes to upping your numbers, although ecologists urge anglers to avoid spawning periods in general, lest it disrupt the ecosystem.

Responsible anglers intent on fishing during the spawning seasons of either species should reel in slowly, unhook fish while partially out of the water and look to release fish back into the water as quickly as possible.

This general advice not only benefits the fish and environmental balance, but also helps preserve the joys of the sport for future generations of anglers too.

Outside of the spawning seasons, anglers should be able to have reasonable catch rates throughout the summer leading into the fall too.

Winter times, especially in the case of the smallmouth that slows down its metabolism into a semi-hibernation state, will generally be a lot slower.

Finally, the best season to catch either species also depends on location a great deal too. Waters in the south of the US will tend to warm up earlier than those in the north, meaning that bass population booms will shift forward in time throughout the southern states.

Spring fishing is also largely dependent on the weather and areas of cover too, with certain areas of the water warming to higher temperatures than others.

As for why the periods around spawning seasons prove the best to pull bass from the water? It mainly comes down to female hunger in the lead-up to the spawning period and male aggression in defense of territory and mating rights.

Quickly releasing males caught around this time ensures their energy isn’t depleted too much and thus prevents predators from destroying nesting sites.

Tips for fishing around the summer and spring seasons include targeting flats (weed beds) where bass tend to stalk the large populations of fodder fish that are also numerous at this time.

Fishing the outer edges of these beds, with quick jumps of the bait in muddy water and slow retrieves in clear, is an effective way to draw in both species.

The standard light to medium action rods of bass fishing work well with either, while baitcasting rods provide more precise casts – something that could prove important in the flowing water that smallmouth often inhabit.

Beginners, as a general rule, will probably get more mileage and fun from spinning rods when targeting either species. This is due to a simpler casting mechanism that prevents tangling but limits accuracy and distance. Using the right reel for the rod will make things easier too.

In terms of line, pound test in the range of six to ten is a good bet but anglers shouldn’t worry too much when it comes to selection. Braided line might prove too thick and heavy for bass fishing, especially in the spring and summer seasons when fish are highly active.

For that reason fluorocarbon line, due to its near-invisibility, is the most commonly recommended.

Both species of fish, due to their varied and similar diets, will be attracted by a wide range of lures. Soft plastic worms and jigs, minnow and crayfish imitation lures, and spinner baits are just some of the lure types that bass anglers have good success with.

Distinguishing between the two types of fish, although tricky, is actually much more difficult than catching them. Hopefully, the differences outlined above, as well as the tips on when and how best to catch them, can help.